How many times do you walk into a hospital emergency department and get greeted like this: "Miss Smith? We've been expecting you!" *reaches out to attach my patient arm band*

Yes, valet parking, escort service, a personalized touch and, wait, walking through a metal detector? All part of the royal treatment at Chez Duke yesterday for what became my first (?) dry run. It turns out dry runs are far more common than I realized.

As Todd was watching TV and I was in the ends of a feverish nap (a side effect from my Reclast infusion on Wednesday), we got the call about 4:20 pm. After only two days on the list - wow!

The man from the emergency department front desk escorted us over to the Medical Pavilion next door. We went up onto the operating room floor - everything completely white and sterile, even the hallways - and knew we were in the right place when we saw the surgery schedule board with me as the only scheduled surgery for the day! That was weird. Like I said, nothing but the best, right?

Everything was very quiet. It's 5 pm on a weekend, a dead time for the operating rooms other than emergencies or transplants (I guess). We turned the corner into the triage area - we walked past empty supply rooms, deserted computer kiosks and then slot after slot with empty made-up beds with clean sheets, everything put up and away, lights off, curtains opened, all ready for the next patient...there was something apocalyptic about it. If you've ever had any sort of surgical procedure done, or been back in the ER triage, you know that these areas are always full and bustling with something you both very much do and/or don't want to see going on behind the curtains. (I'm always curious/nosy, aren't you?)

Anyway, we make it to the end of the hall to the one nurses' station with the lights on and three smiling nurses who are all expecting me and introduce themselves. I am shown to the room directly at the end of the apocalyptic hallway.


Getting Down to Business

First they have me give a urine sample. Then they have me change into a gown (I was hoping to put this off a while longer since they make maneuvering nearly impossible.) Then they wrap the pulse ox on my finger and attach the industrial strength sticky heart monitor pads to my chest (of course I don't discover this until I try to pull them off later!) They draw 15 tubes of blood off my port (yay port!), check my blood sugar, go through my entire list of medications, have me do a nose swab culture and then a man comes to do an EKG. They give me my first dose of Prograf (anti-rejection medicine.)

Also during this time, a woman from the research team comes to have me sign a consent for EVLP. This is the "lung in a box" study I have mentioned before in which an additional four hours of testing is done on not-quite-perfect lungs to see if they perform up to the high standards needed for transplantation. It is an attempt to have more lungs be usable that are currently discarded. I had been told that the lungs they had in mind for me would need to be put "on the rig," as they call it, when they got back to Duke (this means possibly an additional four hours of waiting time for me to know whether or not surgery is a go.) It also increases the chances of me having a dry run because the organs are used only about half of the time.

Finally, a man from the surgical team came to read me the consent form. It was all pretty straight forward. By now all of our questions have basically been answered.

And then, we waited! Eventually Todd decided to go get a bite of food before the cafeteria closed. About 20 minutes later, my phone rang: the lungs were a no-go. It was a little after 8 pm, not even four hours after we'd arrived. And while they aren't able to tell us, we speculate that the procurement surgeon must not have even thought the lungs worthy to bring back after he saw them. That was about as quickly as things could have possibly gone.


How Had It Felt?

While nerves definitely played in, I felt ready for surgery. I felt scared, yet confident in a way I hadn't expected. But I was also very excited when it was called off. It was bugging me that my hair was greasy from not having been washed in two days and having laid in bed with a fever all afternoon (yuk), and I had my heart set on a nice juicy steak dinner that night. If we hurried, we could still make it happen!

After shoving a pack of crackers and drinking almost all of my mom's bottle of water, we packed up and I was wheeled out of the Medical Pavilion to our already waiting cars - I tell ya, it's first class all the way at Chez Duke. It was a beautiful North Carolina evening, not even that hot, the sun starting to set. 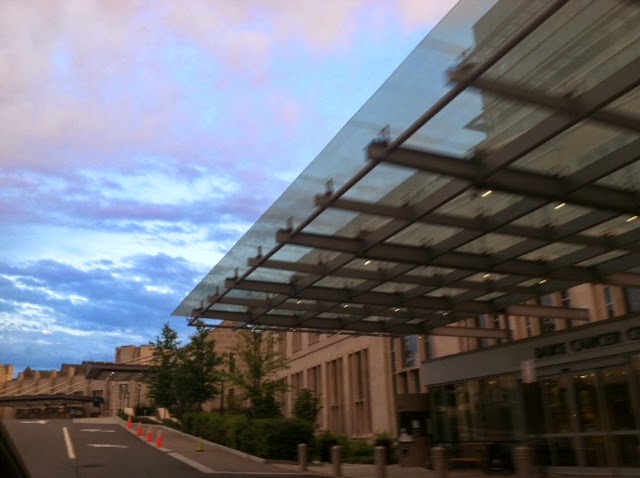 If there is anything I've learned during my two-almost-three days of waiting for transplant, it's "eat when you're hungry, sleep when you're tired" (and shower when you're feeling nasty too, right?) because you truly never know when that call will come.

The next order of business then was finding a good steak dinner at 9:30 at night. We thought of a place with easy parking that wouldn't be that crowded. And so we showed up, me in my exercise pants and baggy sleeping shirt with two-day greasy hair, ate a damn good filet mignon, she-crab soup and petite asparagus spears and drank all the ice water I could fill up on -- all the while continuing to glance at my phone knowing that the next call could come at any moment.

Posted by environmental fiend at 10:33 AM