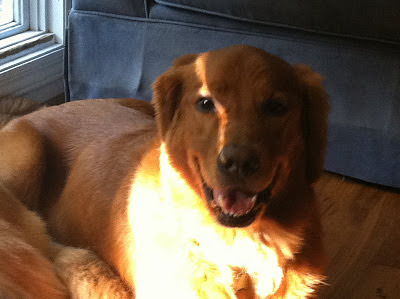 Doc on spa day
This was a good weekend: Friday we went to an awesome Hurricanes game (they beat the #1 west-coast team 3-0!), had two good walks with the dogs in the brisk fall weather, and got to sleep in two days in a row! Tonight Todd's dad and aunt are driving here for a Monday appointment and I am cooking dinner for them and having my mom over, too. Looking forward to that.

In dog news, the boys got their second bath/hair trim of the year this week! They looked so adorable and were kissably clean. :)

In cat news, one of my cats (Diosa) has decided that she doesn't like jumping all the way up on top of the entertainment center to eat. (The food is there so that the dogs can't reach it.) So she sits at the foot of it and meows pathetically for some kibbles. It seems like she spends her days asking for either food, catnip, or to be let out! In her defense, she is 11 or 12, is somewhat visually impaired, and has never been the most coordinated of cats. All this is to say... we knew this day was coming. :) Hopefully we can find a solution to this problem soon.

In human news, I had a good CF clinic appointment this week. The highlights were:
My lung functions being up is no doubt a result of my almost daily exercising lately. I have been careful not to irritate my back (which by the way is doing poorly again - more on that in a minute) with pretty good success. It is so nice to be able to do something to feel in control of my disease. And nice to see results both in the numbers and in feeling clearer every day. Exercising really does seem to make my lungs work better. My doctor says that exercise is the most important therapy that we have.

The change in inhaled antibiotics is a BIG deal. I have been constantly rotating two antibiotics for three or four years. When I started doing this, it was because I was in the middle of a rough period of infections that I was having trouble coming back from. Because of this we wanted to do everything to prevent further decline.

Now, in light of just having finished an inhaled drug study in which I was off inhaled antibiotics for either two or three months, and the fact that I did really well, has led us to reexamine our strategy. Since the effectiveness of inhaled antibiotics decreases over time, hopefully using them less will make them effective for a longer period of time.

One interesting thing, and something I have myself thought for a while. My doctor says that while there are no studies to prove it, he suspects in the future CF patients will be rotating more antibiotics. Like, Cayston one month, then Tobi, then Colistin, then (the upcoming) levofloxicin, possibly with a month off in-between...so that your bugs are seeing different classes of antibiotics all the time. He said that he is not opposed to me trying this now, if I am interested. So I just may!

My high blood pressure is possibly the result of being on daily Prednisone (but I have been on that for years, so I don't see why now would suddenly be a problem), possibly because I am taking Aleve daily because of my back, or possibly another reason. I think that both of my parents are on or have been on meds for this, so I may be predisposed to it.

Anyway, I would by lying if I said it doesn't bum me out. Another freakin' thing to deal with. But it seems to be relatively minor. And if Aleve is the culprit, well, I won't be on that forever.

The deal with my back is that the first two steroid shots really helped. Then, the evening after my follow-up appointment for that, my back got irritated with a bike ride and was increasing bad the next week. I am back to having more regular pain and taking 2-3 Aleve per day and on top of that I am taking the tramadol pain medicine they prescribed regularly me for the first time.
Posted by environmental fiend at 9:11 AM 1 comment: 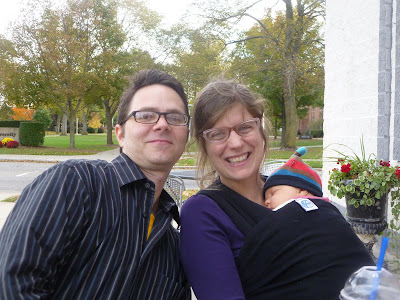 I apologize for the gap in blogging. As always, a lot has been happening, but I will give you the Cliff's Notes highlights.

After two epidural steroid injections, my back and leg are doing much better. I have gotten two shots in the last month and each went pretty well. The first one got me about 60% better, the second about 90% better. Most of my day-to-day pain is greatly minimized or gone. At this point, still in the "acute" phase, I am supposed to take it easy with stretching, bending and twisting for the next month or so and then I can start phasing that stuff back in and see how it goes. Herniated discs can take 1-2 years to heal. The cortisone injections will help me deal with the pain/tightness/discomfort in the meantime. Hopefully I will not need too many more of them. 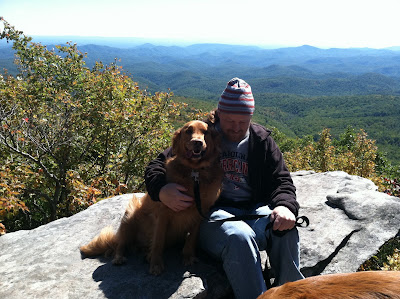 Sam and Todd at Ship Rock, off the Blue Ridge Parkway
We had a great trip to the mountains three weekends ago. It was the first time we had been there all summer long! We arrived just in time for a wonderful patch of fall weather. The skies were blue, temps were cool. We went on some awesome hikes in the Linville Gorge and off the Blue Ridge Parkway. Great exercise and great fun. 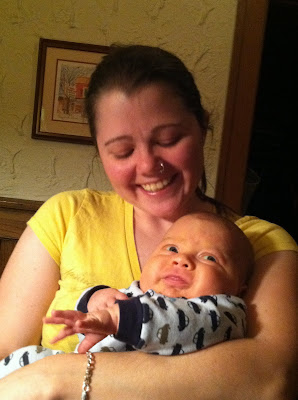 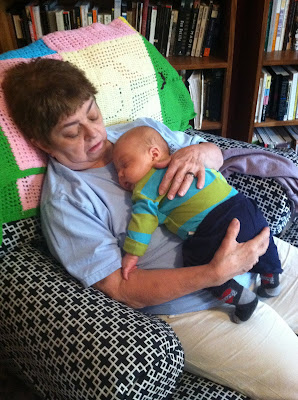 Mom (grandma!) and Simon, sleeping his favorite way (being held and on his belly)

Had an incredibly awesome trip to Michigan two weeks ago! I absolutely fell in love with my new nephew. He is so sweet and cuddly and kissable. I've never spent that much time around a 7-week baby. It was really amazing. All of his little grunts and uncontrolled movements and facial expressions... he's just a little ball of innocence. Looking so forward to going up there for Christmas.

On Saturday, we rode the train to Charlotte to see a Checkers (minor league hockey of the Hurricanes) game with some friends. We stayed right downtown - it was a lot of fun! 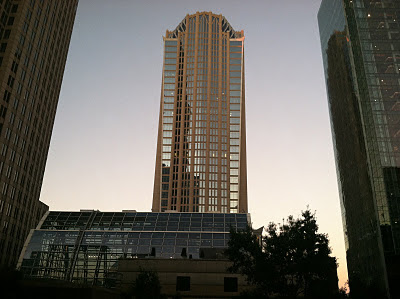 View from our room, downtown Charlotte
Sort-of surprisingly, my health and lungs have held up through all of this traveling. I say 'surprisingly' both because this is getting into my bad time of year for lung infections, and because I've had some hemoptysis over the last few weeks (which can be a sign of infection.)

Unfortunately for the inhaled levofloxacin study I was in, I had to start back on my inhaled antibiotic regimen, and also added in an oral antibiotic to give me a boost. With that, continuing to exercise, and trying to get enough rest, etc. my lung functions have returned to where they were before my recent slump. Yay!
Posted by environmental fiend at 6:40 PM 2 comments: