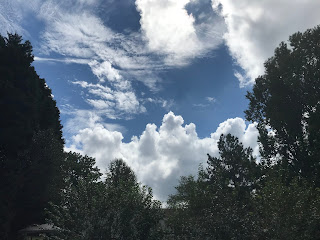 Sunshine before the storm

I sit listening to the gusts of wind outside and the rain drops intermittently hitting the living room window: What at first seemed like a bear approaching has turned out to be a mere fluttering of wind and rain.

I texted with a friend the other day about how things were going in Raleigh, directly in Hurricane Florence's target: "Good news for us but bad news for someone else," I started, before explaining that the forecast had become ever more favorable in the last day or so.

Fortunately we'd had warning of the storm since Monday (or at least that's the first day I started paying attention) - Tuesday was the first day I went out shopping. I had plenty of time to stock up on supplies: I had batteries, water, non-refrigerated food. I'd waited in line for gas, ordered medications and charged all of my electronic devices. The flashlights and emergency radio were out. We'd even gotten doggie Xanex filled for the dogs - but not before the vet had run out of stock and replenished the supply. 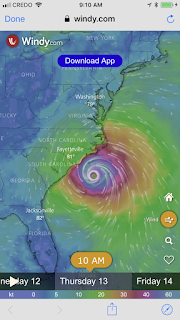 Hurricane Flo with Raleigh in its sights

As I was trying to sneak a walk in with the dogs between bands of rain on Friday, that thought returned to me again: Good for us, bad for someone else. Yes, we had been lucky, but we'd also had days to prepare. Then as the storm approached land, its course had started to move toward South Carolina. I thought about those folks who hadn't had as much chance to prepare - enough time for stores to run out of things like bottled water, restock and then run low again. I was thinking what shitty news it would be to have a hurricane unexpectedly on the way. So while the new prediction was good for us, it was bad for others.

In the same way, receiving a transplant from a deceased donor is an amazing thing for a recipient - literally a second chance at life - and is a terrible thing for the donor's family. Even more so than a regular death, transplant donor deaths often involve tragedy like car accidents, overdoses and other freak accidents of those who's time is far from seeming over. It's incredibly sad, and I think that organ donation often helps donor families find some peace with their loved ones death. I hope that my donor family has found peace. 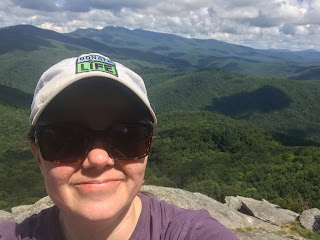 It's always been a difficult thing for me to think about my donor family. Some people claim to think of and thank their donors every day. I've never been like that. I'm a little ashamed to say it for fear of seeming ungrateful.

It's not that I am not thankful - of course I am. When I think of my donor family it's more periodically, like when something happens to remind me that I'm not just a normal person now, which is how I feel most of the time, but that I am living on "borrowed" or "extra" time. You only live twice, I like to say. (Credit to Ian Flemming...although under that logic I know some people who have lived three times or more.)

I am grateful for time I've used to travel, lust after hockey players, see my nephews grow up and much more. I just don't feel I owe anybody anything for that. Is that so terrible?

The truth is, I think being an organ donor is the right thing to do, just as it is the right thing to file taxes, drive on the correct side of the road and not cut in line at the grocery store. These are all things that make society work smoothly. So everyone has to wait their turn to check out, and people who would otherwise die without organ transplants receive them without the "luck" of waiting for a perfect match. Makes perfect sense to me!

These may seem like loose analogies, but I also think it's the right thing for people to give blood, bone marrow or even a kidney to someone in need - as long as it doesn't put the donor in any kind of jeopardy. And when it likely comes time for me to need a kidney, I will not feel bad about asking everyone I've ever known to get themselves tested.

Why do I feel so entitled to this? My life has been hard. I don't remember a time when CF or diabetes did not affect my every day until my lung transplant. When I was a child, it was bronchitis and submitting myself to percussive therapy (which I rarely did without a fight); in high school it was being chronically late to school because my sleep extended into the morning hours as I tried to live the life of a "normal" high school kid; as I started into early adulthood, I dealt with coughing fits in public, coughing up blood, coughing so hard I peed myself...and then eventually I was on oxygen, not able to physically keep up with friends and not able to work at a job that I loved. After all of that, I feel like I've paid my dues. 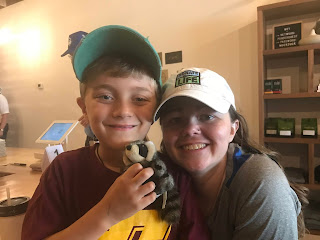 Has everyone who's needed a transplant "paid their dues" in this same way? Absolutely not. Some lung transplant candidates smoked, some liver recipients drank. Many have not lived lives of chronic illness, but rather had acute incidents later in life that led to organ failure.

But I believe everyone deserves to live twice - at least, regardless of bad choices took place in the past. Lord knows I've done my share of irresponsible things. That seems fair to me. I don't want to live in a society in which someone may die because another believes that a doctor may not try to save their life if they have a little red heart on their drivers license. (Not true!)

So I will end with some numbers.

Only 45% of Americans are registered as organ donors, on average, though it varies widely by state.

And perhaps the most poignant: one organ donor can save eight lives, and enhance the lives of countless others with their corneas, tissue, bone and bone marrow.

Are you registered? Do your loved ones and people you care about deserve the chance for a second life too?