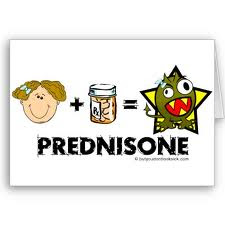 I've been really lucky in that Prednisone has never had the "monster" effect on me - except for maybe a few times when I was on a really high burst. And even then it mostly manifested as having a lot of extra energy (i.e. an extremely clean house!)

Some history: During 2008, my lungs took a pretty big dive. Part of getting my lung function back - which turned out to be an incredibly long process - was adding Prednisone to my routine. It worked really well for me. Almost, it turned out, a little too well.

I say this because it's not uncommon for cystics to do a burst of Prednisone during an exacerbation - they'll start as high as 40 or 60 mg/day and taper off of it in a week or so. My problem was I responded so well to it that I was never able to taper off completely. I've tried though! Part of me starting allergy and Xolair shots in 2009 or so was to try to get me off of the oral steroids. I'm sure the shots have helped, but not enough to get me off the Prednisone.

I've spent a large amount of the last four years on 10 mg a day. This isn't a terribly high dose, but ideally I'd be somewhere around 5 mg. I honestly don't think it's realistic to be off it entirely. But steroid use does not come without consequences: Long term use is not good for your body - steroids depress your immune system and contribute to bone loss. That's especially bad for cystics because we have a predisposition to bone loss as it is from our malabsorption issues. I was diagnosed with osteopenia (a stage of bone loss less severe than osteoperosis) before I even started Prednisone.

So, since I have been feeling so awesome lately and I'm in an 'exercising like crazy' stage, I thought this was the perfect time to try to taper down. This happened in several steps - each one would make my body feel like total crap for at least a day - and the result is that I am now down to 5 mg! I am so happy and really proud of myself.

So far it is going well. I do notice a little less intensity of being able to exercise, but I'm hoping I can build that up in time. Go me!

Posted by environmental fiend at 8:57 AM No comments: