What's up with my back?

Welcome to the newly named "L Word" blog. I'm not sure why I felt inspired to make the change except that during a brainstorm one night I found it to be particularly clever - that and I had been a little disenchanted with the name "Catboogie's Dream."

As most of you know, I have been experiencing leg/back issues for the last several months. Now that I have some answers about what is really going on, I wanted to fill you in more in-depth. 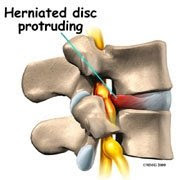 A herniated disc happens when part of the disc (in most cases already degenerated to some degree) pushes through the lining and, in my case, pushes on the sciatic nerve
First, to review, how the issue of how my herniated disc came to be: This is pretty much what my MRI looked like; a black disc means degeneration, lowest area (arrow) has a protrusion
That brings us up to now.

I liked the surgeon I went to see, who was recommended to me by my physical therapist (who I love, by the way) as the best guy in town. I was very glad that he wasn't trying to rush me into surgery. He understands it is a last resort, and that general anesthesia is especially hard on people with lung problems.

However, I am not feeling completely confident about the current plan because from what I have read about the steroid shots, there is such a varying degree of success. And sometimes they don't help at all! Not that I have anything better to suggest. [ I am so willied-out by the idea of a a spinal injection I haven't even been able to think about it, by the way. It's like flying. I just schedule it, then show up, and that is when I can start worrying. In this case, it will be Wednesday at about 2:30pm. :)]

There is a bit of a bright side here. I realized this week that this is really just a quality-of-life issue. I mean, sort of just. With my gallbladder issue, when I was facing surgery, there was a real risk to not doing anything. There was an added fear factor on top of the medical issue itself. However, there is no real danger that can come of this not being treated or getting worse besides pain and discomfort (as far as I know). This thing is going to heal on its own eventually, it just depends on how much time I can give it and how much help it needs.

Now, given that, with my CF, I need to be able to exercise (and, please universe, one day get back to yoga) and I will always be coughing, etc. And the fact that I don't like taking pain meds around the clock and being attached to an ice pack, there is an interest there to get this cleared up asap. I want to give this time, but it is hard to be patient when you are in pain.

Lastly, another bright spot. My lungs continue to be doing really awesome right now! (I actually have still been exercising a couple of days a week.) Possibly because of the new inhaled drug study I am participating in. Although that actually brings up another issue: in order to finish this drug study, I will need to hold off on surgery (I would think) until after it is completed, which is five weeks away. Hard to think of hobbling along like this for that much longer.

One step at a time. I go Wednesday for my injection, if that goes ok, I will get another one in two weeks and then go back to talk to the neurosurgeon. In the meantime, I am making a concerted effort to heal myself, and plan to read up a lot on all this stuff, and possibly pursue alternative treatments before surgery will really even be an option.

Roses are red, violets are blue 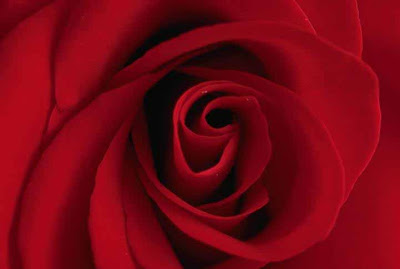 Maybe if you've nothing nice to say

You're best off to wait and blog another day.

I'll admit this is how I've felt the last couple of weeks. When I recently told someone about my blog, I found myself saying, "I try not to write all about health stuff because I find it's kind of depressing and most people aren't really interested in reading about it." As soon as I said that I realized that my blog has been almost exclusively about my health adventures over the last year or so. (And that if someone didn't know me, they might think I was a total hypochondriac!) Which is not ideal, in my mind, but it really is the stuff I most enjoy writing about. It is therapeutic for me. So perhaps, in wanting to try to find a balance between keeping people informed and boring others to death, the thing to keep in mind is that my writing helps me. And maybe that is the purpose - I don't know.

In any case, in some ways it has been a hard couple of weeks. PT has dragged on helping only minimally while my leg has - for some reason - decided to start being in much more pain than ever before. Standing on it for even a minute or two will lead to pain sometimes so bad that it actually takes my breath away. Can you say not fun? The good thing is that as long as I stay moving, it is ok - took the dogs for a long walk downtown last night and it was basically fine. And, when I sit down, it almost instantly gets better, which I am also thankful for.

I had my initial visit at the neurosurgical doctor this week. I had zero nerve reflex on my right foot. I'm no doctor but that seems bad to me. The P.A., who I saw, said that means the problem is coming from the L5, the lowest vertibra. That there is something going on there affecting both the nerve signals and muscles in my leg and foot. Next step is an MRI. I had a horrible sinking feeling when I left the office. Like nothing good was going to come of all of this. Steroid injections? Surgery?? Not my idea of a good time. And by the way, why me?? With all this other shit I have to deal with.

But it is almost getting to the point where relief is welcome no matter the cost. I was thinking about how I used to be able to avoid irritating my leg during the first, I don't know, two years this was going on. But now, not so much - I can't avoid standing for god's sake! And when I think about the ways that it has changed the way I live my life, especially with exercise and yoga, well, let's just say that surgery (if an option) is no longer entirely out of the question. Which is a pretty huge thing for me to say. I really think that my goal of all this to to be pain free/minimal pain at least, to have greater range of movement, and to get back to yoga. Life just isn't the same without it.

In the meantime, I am (sometimes) barely getting by on Aleve, muscle relaxers and ice. I honestly don't know that the pills are doing any good. Oh, and my PT exercises. Still doing those. Sometimes they help. And others, like this morning, they seem to do nothing at all.

Drug Study: Even though I haven't been able to exercise my normal amount, I have seen my PFTs go up a little bit in this drug study I'm doing with a new inhaled antibiotic. I don't know if I am on the placebo or not. In any case, it is extremely awesome that even though the rest of me is sub-par that my lungs are totally hanging in there!!

Another great thing right now is that work is going awesome. I am busier and happier and more challenged than I ever have been. Also been doing a lot more writing and editing, which I enjoy (especially the editing.) I've been working more hours than usual and - being very conscious of getting enough rest at night - again, my body is holding up really well. And that's great.

Coming up: still waiting to see when a good time will be to go up north to see my new nephew Simon!! We are starting to think about planning some trips for next year. And, of course, hockey season is right around the corner. :)

Tonight we are going to celebrate my oldest friend Erica's birthday. Been looking forward to it all week!

Image taken from http://www.pictures-of-roses.com
Posted by environmental fiend at 8:04 AM No comments:

A Change for First Friday 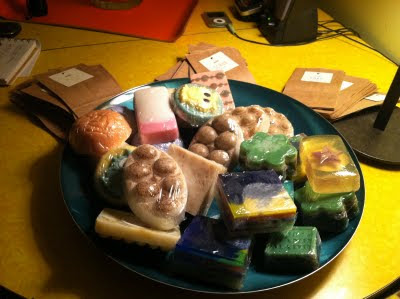 Our latest batch all ready for First Friday September

808 Soap has had First Friday, a downtown event during which art galleries stay open late and entice people in to browse with free wine and beer, on the third floor of a really old and quirky building downtown (Father & Son) for a year-and-a-half or so. We were all set for First Friday September with 25 new bars of soap and then... we found out that our normal place is still trying to resolve some issues before they can have big events again.

After a brief moment of panic, we decided to ask our friend who owns a bar downtown and, while 'selling bars in a bar' has a cute ring to it, we really weren't expecting much. It would be totally different than our normal crowd, would not get busy until later in the night after we were done, and who even carries cash anymore?

But it actually turned out really great! (Sadly, I got not a single picture.) Though the bar is the opposite of Father & Son in almost every way (3rd floor - basement; hot - cool; light - dark; cramped room - lots of space; limited alcohol selection - infinite choices of alcohol) somehow it worked. We sold 9 of our 25 bars in just over 2 hours of time, which is a good night for us.

So what is the future of 808 soap's First Friday? With the holiday season soon approaching, we definitely need to figure it out. Father & Son will likely remain a good place to sell during the rest of the month, but First Fridays there may never be the same. 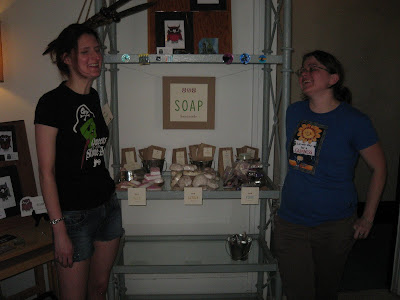 Elaine and I at our display at Father & Son
Posted by environmental fiend at 8:54 AM No comments: