Some Things I Liked About Duke 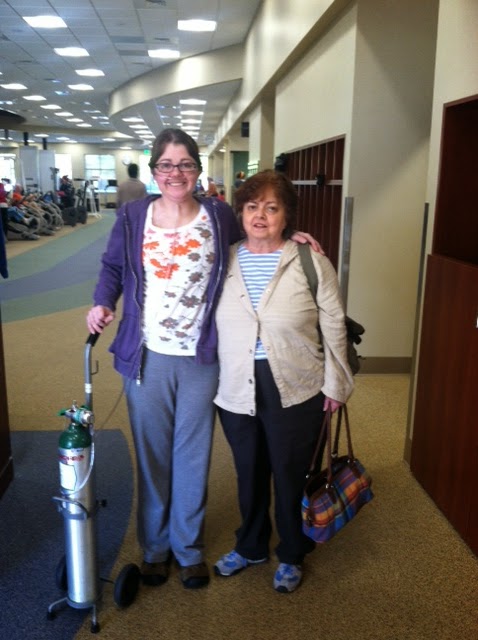 I had my initial Duke appointment for lung transplant evaluation this week. The day consisted of an introductory meeting with the pulmonary rehabilitation folks, some basic tests (lung functions, x-ray, a blood draw and a 6-minute walk) and a meeting with the head pulmonologist. Mom, Todd and I were there for about seven hours total. Long day!

So many things were going through my head as I sat in the back seat with my big oxygen tank on the ride home. I felt numb and discouraged...  I could not wrap my brain around how this was all going to work out, and all of the pictures of transplant I'd had in my head suddenly seemed like looking back at old black and white photographs. Was I sure this was really for me?

Probably some of that was fatigue. And the fact that one should feel overwhelmed after a day of going from clinic to clinic, seeing all new faces crowding into a waiting rooms filled with the ghosts of Christmas past and future. It was like all of the progress I've made toward warming up to transplant was stripped away.

It's a thing with me that I hit rock bottom before a big upward swing. And fortunately I woke up the next day with less doubt, fear and feeling less overwhelmed. Let's do this!

I emailed my transplant coordinator some bullet points I wanted to be sure the pulmonologist understood about my current state of decline, went to pulmonary rehab and continued talks with Todd and everyone about what all of this means, what it might mean and what all that means about what we should do now.

Ultimately, we and the pulmonologist agreed that it was the best thing for him to recommend me to go ahead with a full evaluation. There is a committee made up of the doctors, transplant coordinators, social workers, pulmonary rehab folks, et al. that meets every Tuesday which makes decisions about who to accept (and, after evaluation, who to officially list) for transplant.

They will discuss me on Tuesday - I should be a pretty clear case since there are no "deal breakers" with me at the outset, I am clearly either very near or at the start of the window for transplant evaluation and (I hope) because they have realized my awesomeness and what a good candidate I am in their short time knowing me. I should hear either way from my transplant coordinator by the end of next week I hope.

Assuming that I get the green light, scheduling will then begin for evaluation stuff in the coming weeks and (at some point) they will want me to start their treacherous month-long pre-transplant pulmonary rehab program. I am confident after meeting everyone that they will not let me  deteriorate waiting for the four weeks to be up if I continue to have these (pretty much) recurring lung infections causing more decline. Physically, I am fit enough by their standards to undergo transplant; anything else is icing on the cake as far as I am concerned.


Some Things I Liked About Duke

And now for promised things I liked or was impressed with on Wednesday:


Some Things I Didn't Like So Much About Duke

Overall, we all left feeling like we had come at the right time, and that we were in good hands. And while they told me there was nothing more I could be doing to be a better candidate, I have decided to try and start doing pulmonary rehab 3 instead of 2 days a week in Raleigh. And I am making a better effort to get my blood sugars under better control - things have just been wacky lately and it doesn't help that my sugar intake is higher than it should be.

Other than that, continuing to talk about and process things with my friends and family, doing IVs every 8 hours, living life as normally as possible these days and still holding onto some hope that things may improve or at least stop declining so that this won't all feel like it's happening so fast.

Posted by environmental fiend at 10:07 PM