Last night was a little rough... 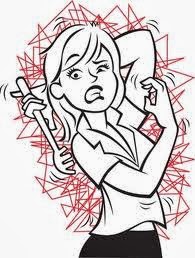 I continued to have trouble with "itching" - I put that in quotation marks because I'm not sure if it's technically an itch or some kind of strange nerve tingle. But for simplicity sake, I will say itching. You may have pieced this together already, but Colistin can affect the nerves in your extremities...hence the numb facial feelings I mentioned yesterday (that can also happen in hands and feet).

I tried really hard to tough it out yesterday after all of the crazy stuff that happened in the afternoon. Everything else had gotten better or gone away by bedtime except for the itching on my head. It wasn't too bad as long as I was busy with something.

I finally asked the nurse if Benadryl might help. She said it might and tried to order some. But for some reason we couldn't figure out, the on-call doctor did not want to give it to me! Meanwhile, my next dose of Colistin was approaching and I didn't want to not have something in place should the itching get worse after that. I finally told her to tell him I was going to refuse my next dose until I got it (without good reason) and it finally came through.

Unfortunately, the Benadryl didn't make a very big difference. And I had the hardest time falling asleep. As soon as I laid down, it was all I could think about despite my best zen master attempts. After an hour of half-sleep/trying not to itch/itching inadvertently in my sleep, I got up, took half a Xanex, put my headphones in to some John Coltrane ballads and fell asleep.

However, this morning the itching was still there - although reduced - but as soon as I was up and at 'em I was distracted enough so that it didn't bother me.

My doctor said he had a patient with some "facial symptoms" (not sure which ones) that took a while to resolve even after the antibiotic was stopped. My fear (or rather) thing I am being careful about is that these side effects never go beyond something I could handle permanently (worst case, very unlikely). I think this itching is close to that edge. It's okay during the day, but I don't want to feel like I have poison ivy on my face when I fall asleep for the rest of my life.

Anyway, there is going to be a lot for me to talk to Dr Coakley about tomorrow. He is very conservative when it comes to stuff like this and he may want to stop the Colistin. I have mixed feelings. On one hand, I really don't want to be itchy forever, but on the other hand the itching doesn't seem to get any worse with my doses so I am inclined to keep going a while longer.

Otherwise, I felt pretty good today. A little speedy, maybe, but nothing too bothersome. My creatinine was also good today. So that's all good.

In other, more exciting news, I had three friends come to visit today - how lucky am I that SIX people offered to come see me today? Feeling the love.

Otherwise, I rode 40 minutes on the recumbent bike again that is in my room, washed up for my company and got to have an amazing iced coffee from my favorite chain coffee shop. All in all a pretty good day in the hospital.
Posted by environmental fiend at 4:56 PM