Trip, Part I: Good Times with the Smith Family 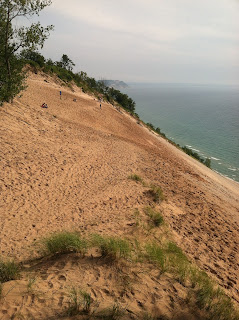 After weeks of preparation and days of packing and planning, we left on our great road trip on the morning of Friday, July 26. As you might imagine, it was quite an ordeal to get all of my medical stuff in order: prescriptions refilled, oxygen stocked up, and gathering an arsenal of "just in case" medicines for if I were to get sick on the road.

In addition to our two giant duffel bags, my two bags of medical stuff, oxygen concentrator, cooler,  box of food for the car and back support pillows, we were taking a rather large toy chest (my dad made it for me when I was a kid), a kid's rocking chair (that has been in my mom's family for several generations) and various other presents for our nieces and nephews.

I tried not to make a big deal about saying goodbye to all of the animals, but I did start crying when petting the last kitty goodbye.

Finally, we were all set to go. Todd turns the key in the car and the battery is dead. Fortunately, I have jumper cables so we pulled up my car next to his and gave it a quick jump. We really should have thrown those cables into the car, but we were thinking it was just a light left on or something benign that had caused it.

Everything was going smoothly. We made it out of NC (what a feeling with all of the BS in the legislature recently to feel the beginning of a long break with all of that) and through most of VA when we decided to stop for our first picnic lunch. We had decided to do peanut butter and jelly for lunches to save money. We stopped at a rest area, the weather was great...we get back into our car to leave and the battery is dead again!

After about 15 minutes we finally found someone to jump us. It was a family from Charlotte who, incidentally, was also on their way to Cleveland and had also had a dead battery when they first started their car up that morning. After several nerve-racking miles of stop-and-go construction traffic (not what you want to go through with a weak battery) we stopped in Bluefield at an auto place and the guys were very nice to install a new battery for us, even though they don't usually do installations.

All and all we thought, for car trouble, we got off pretty easily. Hopefully we got all of our car trouble out of the way on the first day!

We got into Cleveland a little before 8 that night. We were staying downtown at the Marriott for one night, so we checked in and then walked a few blocks to an amazing dinner in Little Italy. The next day, we went to see my dad and Mary Ann. Mary Ann and I quickly snuck off to our two favorite shopping haunts. We had a great dinner with them and then went over to my step-sister Amy's place where we were staying along with my three little nieces and their very sweet dog.

On Sunday, the weather was great again and we grabbed tickets to an Indians game. After that, dad and Mary Ann came over to Amy's for a birthday celebration for my (now) 7-year-old niece Elena. She loved all of her presents (as did her twin 5-year old sisters who "helped" open almost everything) as well as the ice cream cake.

The next morning we set off for MI. I wanted to stop for lunch in Ann Arbor to show Todd my old university town. We were anxious to get to Mt Pleasant to see my brother, but he had texted me that he was still not feeling well and was going to the doctor that day so we were waiting to see how that turned out. Ended up his doctor thought he had the flu (I'm not sure if this is right, but it was definitely the end of some kind of bug), but told him that if he wore a mask around me it should be okay. With everything going on with my health lately, I just knew that I couldn't take any kind of chance. So we took our time walking around Ann Arbor and then had an early dinner at Arbor Brewing Company. Then we drove on to a hotel in Mt Pleasant while we figured out what to do.

We decided on a half-day outdoor visit the next day with my brother, sister-in-law and nephew in a park where Simon could play and we could watch him be cute from a 3-foot distance.


Sad, but it was the best we could come up with. We had lunch (delicious take-out sandwiches) back at their house outside and then left to drive to a cabin we'd found in Manistee.


Our Cabin in the Woods

Manistee is on the west coast of MI about 3/4 of the way up. We chose the location for its proximity to Sleeping Bear Dunes, which I had really wanted to see.


The cabin ended up being really great. It was so nice inside - everything was there that we needed. It was furnished in typical "cabin" fashion with wooden walls and such. It is mostly used as a hunting/snowmobiling cabin, I think, but there is also good fishing nearby in the summer. It's kind of in the middle of no-where in Manistee National Forest. The best part (of course) was the resident cat! He was a small, orange, super-friendly tabby with five toes! We named him Papa and he kept us company throughout our stay.


The next morning, Todd went fishing while I slept in and then drank coffee with Papa on the porch. After a nap, Todd and I set out for Sleeping Bear. It was about a 1.5 hour drive - we took some really scenic back-ish roads up there that wound through beautiful fruit orchards.

The park itself was really neat. There is a loop drive that we took, which took a couple of hours, that took us through lush forests, historic lighthouses and of course the gigantic amazing dunes of Sleeping Bear. We did a short hike along the way that was the only hike I've ever done without shoes!

The craziest thing was literally being on top of this gigantic dune that fell I don't know how many hundreds of yards into Lake Michigan. I've never seen anything like it! Poor souls who got caught in the excitement of running down it without thinking about how difficult it would be to climb back up. I think it would take a normal person an hour or so to climb. Hard work!
The day was winding down, but we stopped in the abandoned-feeling old port "town" of Glen Haven. There was an old hotel, blacksmith and canning factory that they have kept up. Very cool. At last, we took the short jaunt to the town of Glen Arbor, a very small, summer-only, old school tourist destination, where we stopped for dinner before heading back to the cabin.
And here are some other pictures...

Posted by environmental fiend at 11:52 AM